In 1974 Lake Guntersville was opened as a recreational park by the state of Alabama. It is a 6000 acre park located in northeast Alabama along the Tennessee River. It is known for its prize largemouth bass fishing and other abundant wildlife to include Bald Eagles.

A main focal point is Taylor Mountain upon which Guntersville Lodge sits with panoramic views.

The town of Guntersville is a short drive from the park and was named after John Gunter who was one of the first settlers to arrive in 1785. A town developed since it was along the Tennessee River and later the town became a busy port and the county seat. It prospered until the Civil War era at which time life became a struggle during Reconstruction. In 1930, a dam was built below the little town of Guntersville and the town became surrounded on three sides by the water back up. Guntersville soon became a recreational destination. 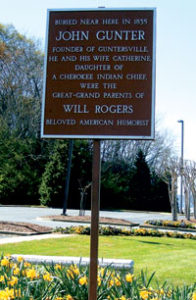 John Gunter, who came from the Carolinas in 1785, was the first white person to settle in what is now Marshall County. He became a “squatter” at a salt deposit on the south bank of the Tennessee River, near the present Veterans’ Memorial Bridge. This site became known as Gunter’s Landing.

John Gunter married Chief Bushyhead’s daughter, Ghe-go-he-li (later Anglicized to Catherine), a Cherokee princess, and they raised a large family. Gunter’s Landing grew rapidly because of its geographic location on the Tennessee River and because of the Gunters’ good relationship with the American Indians; therefore John Gunter amassed a fortune in land, money and slaves. The Gunter children became instrumental leaders who were prominent in both the American Indian Territory and the surrounding area.

Among the Gunter descendants was the noted humorist, Will Rogers, whose grandmother was Cherokee. Rogers’ family went west with the great migration.

Many American Indians, primarily Cherokees, inhabited the Guntersville area until well after 1836, when Marshall County was formed. It was ironic, though, that Gunter’s Landing, which had been a site of harmony and cooperation between American Indians and whites, became a port of embarkation for shipping American Indians to the West. The Guntersville Museum and Cultural Center has dedicated a gallery to local American Indian history, in memory of the Cherokee and Creek tribes who were evicted from their homes and forced to travel the “Trail of Tears.”

The first educational facility was a mission school built by the Presbyterians for the Indians about two miles south of the river. This school, “Old Missionary,” stood on the old Creek Path that the American Indians used to travel to their hunting grounds. Noted teachers at this school were Dick and Catherine Brown, half Cherokee. Mr. Brown also acted as interpreter for Sequoia, the famous American Indian who developed the Cherokee alphabet.

Another man who played a major role in the city’s history was Louis Wyeth, a young lawyer from Harrisburg, PA. Wyeth, who came to Guntersville in 1837, the year after John Gunter died, was responsible for developing the town and establishing the county seat. Through his efforts, the State Legislature incorporated Guntersville on February 3, 1848.

Settlers came into the area slowly during this period. They were primarily of Scottish, Irish, and English descent, migrating south through the Carolinas, Tennessee, and Kentucky. Many of these settlers were hard-working people who did not have strong convictions about the War Between the States. Nevertheless, they were greatly affected by it because the war hit Guntersville very hard. The town was burned from Yankee shelling so that only seven structures were left standing: the Guntersville Hotel, the courthouse, jail, school, Masonic Hall, and two homes.

One of Guntersville’s most illustrious citizens, John Allan Wyeth, had been a prisoner of the war when he was only 17. After the war, he farmed a while before going to medical school. He practiced in Guntersville and then went to New York City for further training. Gaining a reputation as one of the foremost surgeons in the world, he was called into consultation when England’s Queen Victoria required an operation. Dr. Wyeth founded one of New York’s largest hospitals. In the 1880s, he returned to Guntersville to practice medicine, to write, and to help the city in its development. An outstanding author of both medical books and history books, Dr. Wyeth is the only person from Marshall County who is included in the Alabama Hall of Fame in Montgomery. His statue stands on the capitol grounds in Montgomery.

After the Civil War, Guntersville’s growth began as a river town. Then, in 1892, the much sought-after railroad arrived in Guntersville, and with it came an era of growth on many fronts.

Another major change took place when Guntersville had an influx of people who came to build the Tennessee Valley Authority (TVA) Dam. In 1939, when TVA completed the Guntersville Dam and filled the reservoirs, Guntersville became a peninsula city, surrounded by 69,000 acres of water. The city then became an important grain shipping terminal and a port for the distribution of automobiles. In later years, Guntersville became a recreation center, and it gained national recognition as the powerboat capital of the South. When the first powerboat race was held in 1939, about 60,000 people converged to see the new lake and witness the Dixie Motor Races. At that time, it was the largest crowd to ever assemble in North Alabama.